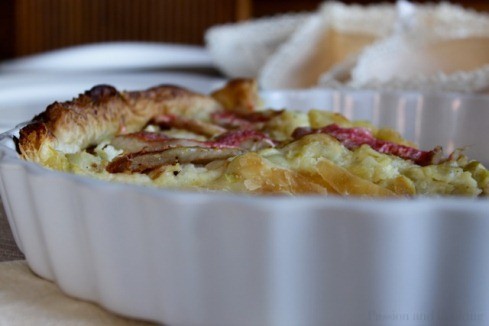 This is a simple, versatile and absolutely delectable recipe.  It is a tasty dish to serve as a starter or enjoy as a main course accompanied by a salad.  The distinct but mild onion- flavor of the leeks blends well with the starchy potatoes and the delicate texture of the red mullet, a light-pink fish found mainly in the Mediterranean sea.  Leeks were used in Egyptian cuisine as early as from the second millennium BC, both as vegetables and as aromatic herbs.  In Roman times Emperor Nero loved leeks in his soups believing that they improved the resonance of his voice.  Nowadays we still enjoy leeks in our soups, risotto, pasta, frittata (omelets), or just raw and finely sliced in salad vinaigrettes.  Leeks are often used to flavor dishes such as fish, pork and lamb.  For example, you can use them as “ natural container” to wrap up food (especially fish) during cooking, to give it an enhanced flavor.  Leeks can be served as delicious vegetable side dish, boiled and then baked with butter and cheese, or simply seasoned with oil and lemon.  In addition, leeks are  nutritious and healthy vegetables, rich in water (over 90%), as well as containing moderate amounts of  vitamins B and folate.  We should not underestimate the aphrodisiac aspect of the leeks, a commonly known since ancient times.

Preheat oven to 200°C (400°F)
1.Wash the potatoes under running water.  Put them in a pan and cover with cold water.  Turn on the heat and bring to boil.  Cook for about 6-8 minutes until potatoes are done but not soft.  Cool, peel and dice them
2.While potatoes are cooling, in a large saucepan over medium heat sauté leeks and scallion in olive oil, stirring frequently for about 5 minutes.  Add ½ cup of water and cook for about 10 minutes until leek mixture is soft.  Cool for about 10 minutes
3.In a large bowl mix the leek mixture, the diced potatoes and the cream.  Season with salt and pepper
4. Place puff pastry in a 30 cm (12 in) baking dish, pour in the vegetable mix
5. Bake for about 10 minutes, than decrease temperature to 180°C (350°F) and bake for additional 10-15  minutes or until custard is set and golden on top
6. Remove from the oven and arrange the fish filets on top of the pie
7. Bake for additional 5-7 minutes until fish is done
8. Remove from the oven and allow to sit for about 10-15 minutes before serving.

Note: At the time of purchase, I would suggest to look for leeks with straight and firm stalks, dark green leaves without yellow spots (a sign of lack of freshness).  Leeks can be kept in the fridge for about two weeks.  Before using leeks, trim the dark portion of the leaves down to the light-green white part.  Clean carefully to remove any dirt.  You can also substitute red mullets with salmon fillets cut into thin and small pieces.  -Paola