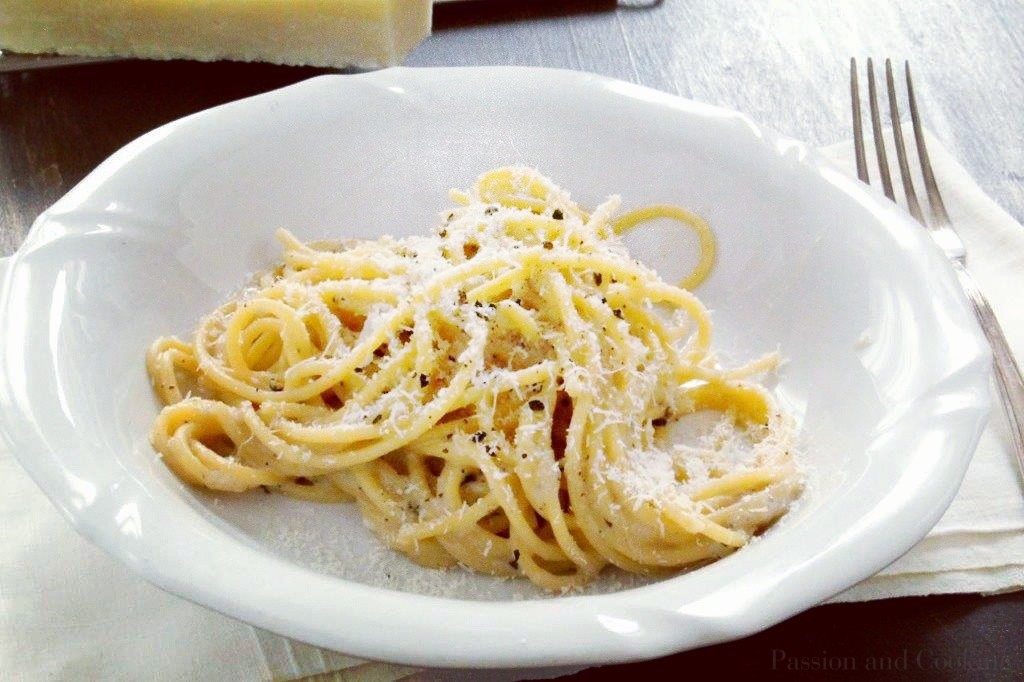 Spaghetti cacio and pepper (pecorino romano cheese and pepper), like carbonara and amatriciana, has now become one of the symbols of Italian cuisine. It is prepared using D.O.P (protected designation of origin) ingredients. Pecorino romano is called cacio to distinguish it from pecorino produced in other parts of Italy. Most pecorino is produced on the island of Sardinia, though its production is also allowed in Lazio and Sicily, as well as in the Tuscan provinces of Grosseto and Siena. Pecorino is a family of hard Italian cheeses made from ewe’s milk. The word derives from Italian word pecora meaning sheep. Cacio is one of more widely used, bold-flavored alternatives to Parmesan cheeses. Because of the hard texture and sharp and salty flavor, cacio is an excellent grating cheese over pasta dishes, breads and baking casseroles. However, the use of this cheese is limited because of its extreme saltiness. It is also rich in conjugated linoleic acid, or CLA. CLA is a polyunsaturated fatty acid that has been studied for its ability to prevent obesity. Full-fat cheese is fine, but you should buy a higher-quality cheese with superior flavor and just use smaller portions according to the Mamma Mia Diet!

Spaghetti cacio and pepper is a tribute to the traditional Roman peasant way of eating. It is a tasty, fast, inexpensive and easy recipe to prepare for a family meal. The secret, in addition to the chemical combination of cacio and creamy water from the pasta, it is the mixture of all flavors: full-pepper grains crushed at the moment and toasted to release its full flavor. The pasta is stirred into the sauce (“mantecata” in Italian) to absorb all of the cacio’s taste. You should prepare this dish to enjoy right away, don’t let it sit around or reheat it – this is an important tip!

1. In a large nonstick pan toast the pepper until fragrant. Set aside half of the pepper
2. Bring a pan of lightly salted water (remember, the pecorino in the recipe is already salty. I don’t add any salt) to boil, then add the pasta; it should be covered but not by much. Stir it occasionally during cooking to prevent sticking
3. Add 240 ml (1 cup) water of cooking water into the pepper and cook over medium heat for 1 minute
4. Drain the pasta 5-6 minutes before it should be done, reserving all the cooking water, and add to the pepper. Cook the pasta and pepper over medium heat
5. Meanwhile, put half of the cheese in a bowl and mix in some of the pasta water very gradually (spoon by spoon) to make first a paste, and then a thick sauce, similar to the consistency of dense bechamel
6. Remove the pasta from the heat. Add the sauce and toss while adding enough of the water (you shouldn’t need it all) to make a sauce that coats each strand. Your pasta dish should be creamy. Don’t worry if it takes a while to come together – keep mixing and it should happen
7. Sprinkle with the remaining pepper and pecorino. Serve immediately. – Paola